An international event as known the 553rd Birthday Celebration of Baba Guru Nanak Dev Jee 2022 is being started to celebrate from 06th to 08th November 2022 by the Sikh community in Punjab, Pakistan. The Gurdwara Janamasthan at Nankana Sahib is located approximately 65 kilometers away from the Lahore province of Punjab Pakistan. 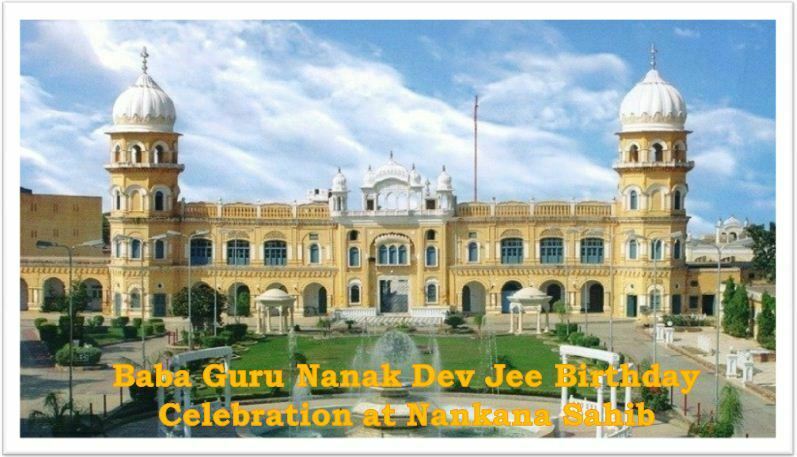 This shrine is frequently visited by Sikh Yatrees from different parts of the world as a pilgrimage in our state. As per history, this Gurdwara was built in the 19th Century by Ranjeet Singh. There are seven (07) Gurdwaras in Nankana Sahib as Janamasthan, Tanmbu Sahib, Malji, Panja Sahib, Patti Sahib, Kiyara Sahib, Ba Lila.

Baba Guru Nanak Dev Ji was born on 29th November 1469 at the location of Rai Bhoi Ki Talwandi, presently known as Nankana Sahib. His father was the local Patwari and his parents were both Hindu Khatries, he has one sister named Bebe Nanaki. The Sikh faith was founded by Guru Nanak in the 15th Century and his celestial touch was passed by nine gurus who followed in series.

He is the founder of Sikhism and the first of the ten (10) Sikh Gurus (teachers), he write a famous book named Guru Granth which is mostly read in the Sikh Community. He devoted his all life to teaching and delivering the message among the people on all platforms that God is one and traveled to remote areas. Many videos, movies, and documentaries have been made on the life of Guru Nanak.

A large number of Sikh Yatrees including Hindus and Khatries arrive in Pakistan by special trains from India and by air from other countries to visit the Gurdwara Janamasthan and pay for their religious rituals as per religion Sikhism.

On the occasion of that event, strict security arrangements have been made and all allied departments such as Military Agencies, intelligence, Police, Traffic Police, Civil Defence, Rescue 1122, Health, Municipal Committee, etc. play their roles for the convenience of Yatrees to avoid any possibility untoward situations.

Emergency Contingency Plans and Evacuation Plans are prepared by security branches, and trained staff is deputed for the Defence of the pilgrims. Moreover, the Palki procession is carried out on the railway road from Main Gurdwara Janamasthan to Lahore More with the participation of a huge gathering of Yatrees online broadcasted on different Sikh media channels.

Baburoonik 15 April 1469, Nankan Basheer born in Punjab near Punjab, was born in the house of Bhai; your father was a patriarch, belonging to the Hindu religion, the only sister of Baba Gronunn, whose name was B. Nikki was five years old. While in 1475, Jammu went to Sarsalali village, Sultanpur, after being married to Jammu, after some time, even after the intense love of a sister, Bahunai lived in the house.

Goronic was not like all children but was different. During his studies, explaining the alphabet to the master of the alphabet, he recited his narration Children and teachers present in class will be surprised in the same way, on one occasion, while reading a counting, while explaining the literature, Baba Gronnank had released his school Fellow.

In the childhood of Baba Groonak, the testimony of being priesthood began to meet school colleagues and teachers. According to school friends, many times it was found that Baba Gordonak used to be alone due to rest, even though a piece of cloud from the sky of the state stood shadow on them, even once it was agreed to accept an unusual child. It was observed that when Baba Guru Nanak was living asleep, a cobra snake was used to protect him.

Early Education and Marriage of Gronnick

After graduating from early formal education Baba Baba Guru Nanak Dev Ji, the founder of the Sikh religion, somewhat distorted for his ideological curiosity and after knowledge and wisdom, founded the basis of the fundamentalist religion of Tohid and human equality,

Baba Guru Nanak on 24 September 182 The relationship with the name of Tataan Ji was connected to Azaj, from which two siblings took birth to you, Baba Guru, who is in the holy book of religious teachings, in detail with detail in detail.

According to him, according to the teachings of the Sikh religion, he did not consider it a heavenly book, but instead of teaching his father Runa to understand the best and perfect leader of life, Baba Guru Nanak Dev strongly believed in the integrity of Allah

and According to the beliefs, the Creator is the only power of the universe, which is keeping it in full control over system life, according to all you are, the creatures of the same God are living in the same way as brothers and sisters.

Mojaj is a human claim and philosophy near Baba Gronnik, who belongs to the same family The welfare of the welfare and the collective efforts for this peace, near the setting of religion, which cleanses their borders, they are directly religious, but spiritually passing through this experience to plan to meet God Can

Baba Guru Nanak Dev Ji said that the conditions for becoming a true Sikh are some of the first conditions, that the acquisition of the law is permissible and the good provision is lawful to all the people in this fifty-eighty-eight and coaches from this world. In Nankana Sahib,

you have been built in the birth of today, which will also be done by a pilgrimage to knowledge and love, where the book is organized every year – on the night of November full celebration of the moon, and in this year the world belonging to Sikh scholars come down on their door to lower their beliefs.

That’s an entire procedure of the Singh’s are celebrated the greetings of Baba Guru Nanak Dev Jee (Mela) Birthday Celebrations 2022 is annually conducted for them and a large number of persons consisted him to perform their religious prayers in Nankana Sahib.