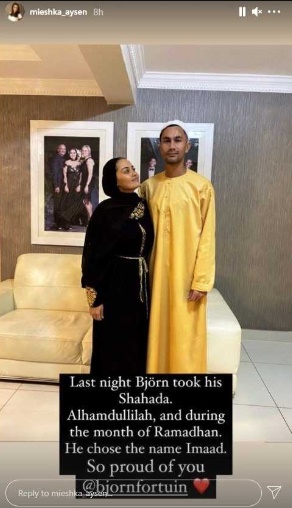 South African Cricketer Bjorn Fortuin Islam’s name was changed to Imaad for changing his religion and returning to Islam. The whole world and Muslims congratulate him and his wife Mishka Aysen. Islam is the world’s largest Religion at second number.

Last night they both embraced Islam. His wife shared the news on Instagram and later on Bjorn Fortuin also described the same story on his official account. It is very good news for the Muslims of the world that other non-muslims accepted Islam.

This is a very sacred and blessed day for them that in the month of Holy Ramadan ul Mubarak 2021 they have embraced Islam. Bjorn Fortuin Islam’s pictures about this have been shared by Tabraiz Shami’s wife on Instagram Social media. We and our team just congratulate them to start a new life by embracing Islam.

Bjorn Fortuin Islam news becomes a trend on social media. Tabraiz Shami has commented with these pictures sharing that we congratulate the South African Cricketer Bjorn Fortuin and his wife Mishka Aysen on accepting the Islam Religion in this holy month of Ramadan.