Federal Minister Asad Umar Minister of Planning and Development has announced that Prime Minister Imran Khan has launched the Sehat Insaf Card Scheme For Islamabad Pakistan. It is stated that in the first phase, the Sehat Insaf Card program will be implemented in these provinces of Pakistan Punjab, Islamabad, Gilgit Baltistan, etc. 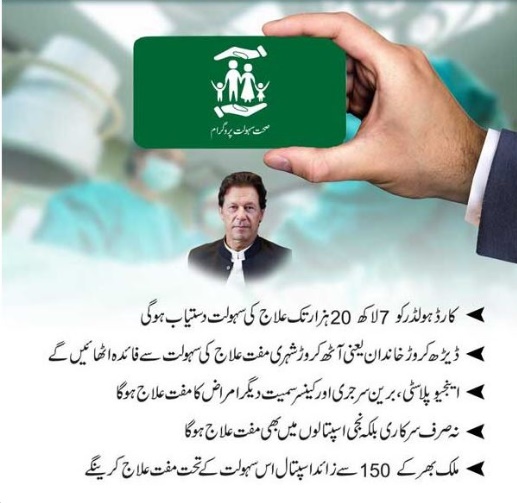 The initiatives about Sehat Insaf Card Scheme for Islamabad have been taken by PM Pakistan Imran Khan on 2nd April 2021 Friday announced by Asad Umar Federal Minister. PM has taken a huge announcement for the residents of Islamabad.

Riaz Tanoli has appointed the director of the Sehat Insaf card scheme who has announced that Health Insurance would be given by seeking CNIC national identity cards instead of Health cards.

The Minister of Planning and Development Asad Umar has tweeted that Imran Khan has waved the green singles to start the PM Sehat Insaf Card for Islamabad residents. Asad Umar tweeted Sehat Card has been also attached to this website for confirmation of this news. 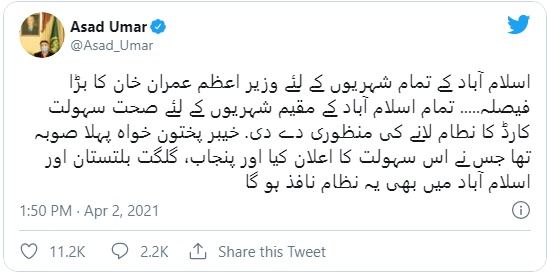 The Government of KPK will pay Rs.2,850/- to an insurance company in Khyber Pakhtunkhwa for free medical treatment amounting to Rs. 10 Lac per year.

P&D Minister Asad Umar has added more than in the first phase Sehat Card was approved for Khyber Pakhtunkhwa KPK. In this province, KPK Prime Minister has aimed to deliver up to Rs. 1 million as insurance for every family of KP. He has said that all families of Islamabad will be provided health insurance for free between the time period Oct to Jan 2021.